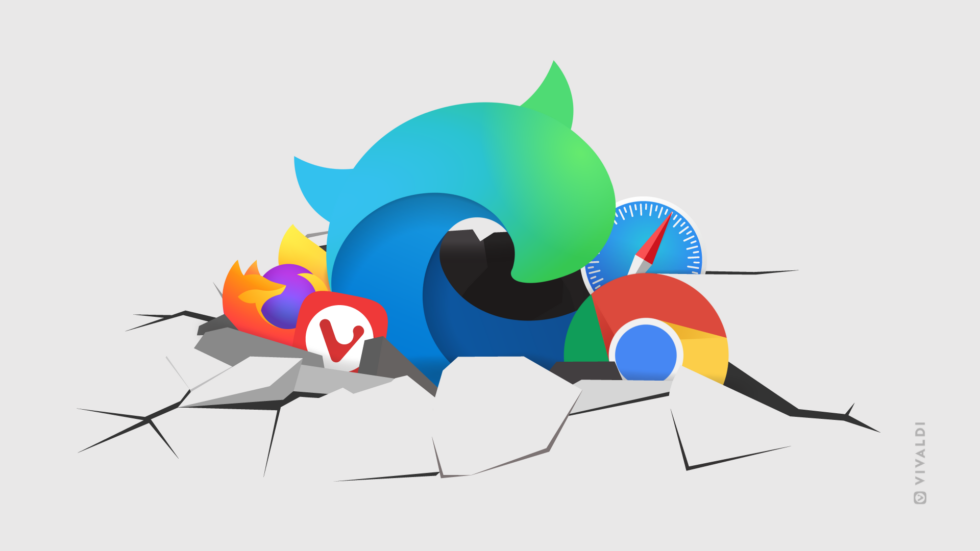 The end of the year is a great time to look back and celebrate the successes and victories of the previous 365 days, ready to tackle the new year with gusto! It’s positive, it’s motivational, and it’s inspirational.

It’s not very funny though.

So, instead of doing that, let’s look at the biggest fails of 2021, featuring most of your favorite browsers — and Edge!

1. Edge decides that freedom of choice is overrated

I don’t think anyone can deny it at this point — Edge has a Napoleon Complex!

The Little Browser That Couldn’t has done so badly at trying to persuade people to use it voluntarily that they’ve resorted to bullying them into it instead.

Trying to find your preferred browser on Bing? The first thing you’ll see is a big old message promoted by Microsoft telling you that you don’t need a new browser, just use Edge!

Do you want to download the installer for your preferred browser? Nah, Edge has blocked your download “because it could harm your device”.

How about changing your default browser to anything but Edge? Here’s a popup insisting you should check out Edge first.

Did you briefly think it was 2001 and accidentally clicked that swirly blue icon? You get a prompt to switch your default browser back to Edge.

2. Chrome dismisses privacy with a FLoC of the wrist

For too long, third-party cookies have been skulking in the background of the web like a Scooby-Doo villain — stealing as much data as possible, then selling it to the highest bidder.

So it was welcome news when Chrome announced that it would be banning third-party cookies from its browser, even though it did raise some inevitable questions around just how they would replace the technology.

This new data harvesting venture is called FLoC (The Federated Learning of Cohorts), and so far nobody is particularly excited about it.

It’s too limiting for companies that currently rely on third-party cookies, because it only covers one browser. Meanwhile, consumers don’t like it, because it’s a sinister assault on their privacy and equality.

3. Firefox redesigns its UI, and upsets everyone

When Firefox tweeted in the Spring about their new browser update, they told their followers to “Get ready for a fresh new Firefox”.

As it turns out, no one was quite ready for their new Proton UI, which focused on simplicity, minimalism, and a new tab design.

There was plenty to like about the new version of the browser— the consistent dark mode was well received, as was the improved cookie protection when private browsing — but the UI changes rubbed many up the wrong way.

It wasn’t an outright disaster, but to many, it felt like a backward step.

One of our most asked questions is “When will Vivaldi be on iOS?” And our answer has generally been “It’s complicated.”

As many of you understand, we can’t use the same code to build an iOS version. Apple requires all browsers in the App Store to be built on WebKit. Which for Vivaldi means starting from scratch.

With a team the size of ours, this means that, unfortunately, 2021 has come and gone without Vivaldi on iOS making its debut.

But all hope is not lost – perhaps 2022 will have some surprises in store. 🙊

5. Safari confuses users with a change of address (bar)

The easiest way to highlight how much Safari messed up with their update to the iPhone browser’s address bar is to go to Google right now, and search for “iPhone address bar”.

What you will see is a list of articles, help pages, and instructional videos showing you how to move the address bar back to where it was.

A lot of users complained that they were hitting the address bar while trying to scroll, and during the beta, some websites became unusable because the address bar blocked functionality on the page.

This may seem like small fish compared to other entries in this list, but considering Apple presents themselves as the all-powerful gods of user experience, this was a big fail!

What were your favorite browser fails from 2021? Let us know in the comments below.👇