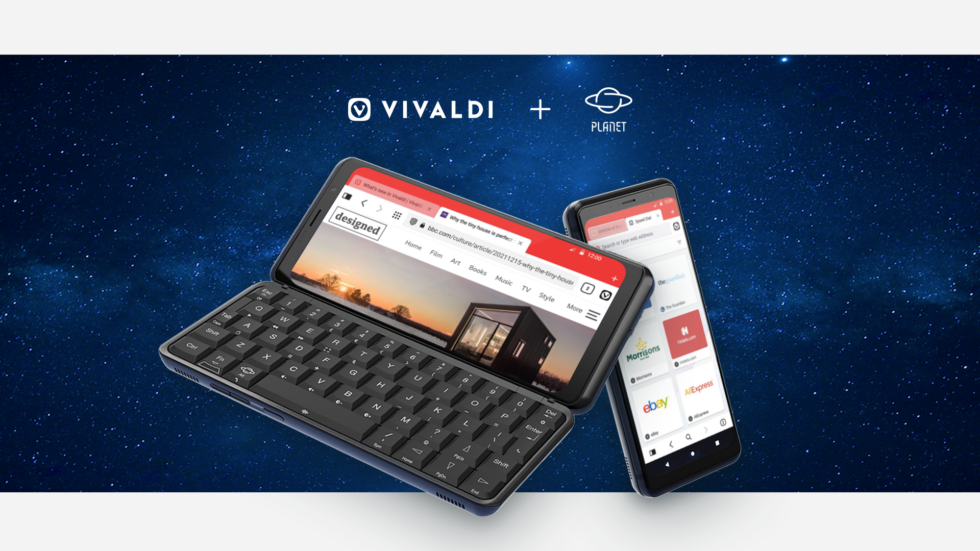 Hot on the heels of being the first browser on Android Automotive, we now arrive on the Astro Slide 5G phone, created by UK-based Planet Computers. The device, shipped with Vivaldi, is being showcased at CES 2022 in Las Vegas.

Described as the web’s best browser by Wired Magazine, we have designed Vivaldi on Android to be as unique as the person using it.

With a host of unique, built-in features to choose from, you can now savor a fun and flexible browsing experience on the Astro Slide 5G anywhere you go.

Just like Vivaldi, Astro Slide enables you to multi-task between work, entertainment, and web browsing all day. Its backlit keyboard lets you type to your heart’s content while on the move.

This phone with a keyboard works as both a standard slab-style device and as a mini laptop. The Astro Slide uses a MediaTek Dimensity 800 chipset. It has 8GB RAM, 128GB storage, a 4,000mAh battery, and Wi-Fi 5. On the back, there’s a 48-megapixel camera; on the front is a 13-megapixel one. The latter can be used for managing video conferencing and selfies, which look great on the AMOLED color FHD+ display, protected by Gorilla glass.

Now, with Vivaldi pre-installed, you can elevate your precision and execution while browsing on a phone. The top spot hunt in browsers is over.

Many of you think surfing on your mobile phone is often anything but efficient. We believe the opposite. Vivaldi has different ways to browse that make browsing flexible and fun. Like Planet Computers, we want people to accomplish their tasks efficiently, without hardware and software limitations, which is why Vivaldi’s browser is an ideal match for Astro Slide,” says Vivaldi CEO, Jon von Tetzchner.

Armed with full-fledged features and customizable options, Vivaldi teams up with this mobile device to deliver the ultimate competitive edge. All without sacrificing your privacy.

Keep unwanted ads away: In place of ads and trackers, enjoy privacy and speed. Off by default, you can enable the built-in Tracker and Ad blocker through the shield icon in the left end of the Address field or head to Vivaldi Settings.

Translate with Vivaldi Translate: This built-in, privacy-friendly translation feature, powered by Lingvanex and the servers hosted by Vivaldi, keeps your translations out of the reach of companies that collect your data.

Sync your data, seamlessly and safely: Browsing data can be synced securely between installations of Vivaldi on other devices with our end-to-end encryption. No third-party servers – Vivaldi stores Sync data on its own servers in Iceland.

Take notes on the go: Create notes as you browse and sync them between devices with the built-in Notes feature. Unique to Vivaldi, Notes help you do more – faster.

Snap screenshots: With this unique browser feature, you can capture, save and share a full-page screenshot of any website, or just a selection of the area visible on your screen.

Search and switch engines on the fly: Switch from one search engine instantly in the Address Bar using nicknames – another unique feature.

Customize the user interface: With a first-of-its-kind user interface, the go-to tools (including Panels, Speed Dials, Notes, and Capture) are within easy reach. In most browsers, it’s difficult to keep track of many open tabs. But in Vivaldi, you can view the tabs that are open and also switch between them easily. The elegant configurable desktop-style Tab Bar is integrated into the UI by default. The width of a tab is calculated dynamically.

Tabbed browsing with a double Tab Bar: Vivaldi’s Two-Level Tab Stacks, a solution that no other mobile browser offers, is something that appeals to tab hoarders. You can stay organized and keep your screen tidy. Tabs inside a group will show in a second row, but they’ll stay hidden when you don’t need them.

Screen space, fine-tuned: The intuitive user interface is well designed for both portrait and landscape mode. Landscape mode comes with greater width. For maximum space – and easy access – the toolbar at the bottom is removed and buttons moved to the top. The System Status Bar at the top can be enabled or disabled for more screen space.

Dr Janko Mrsic-Flogel, founder and CEO of Planet Computers comments, “We’ve always maintained that there is more to Planet Computers than just hardware, and, with Vivaldi, we are offering our users a smarter and more productive experience to complement the speed and style of the Astro Slide.”

Both Vivaldi and Planet Computers cater to people who aren’t beholden to Google. This appeals to folks who are looking for a browser on a phone that lets you run an alternative operating system.

Based in London, Planet Computers is the mobile handset manufacturer behind the award-winning Gemini PDA, Cosmo Communicator and the new Astro Slide.
Inspired by the Psion devices of the mid-1990s, Planet Computers wanted to reimagine the clamshell form-factor for modern audiences. Following several hugely successful Indiegogo campaigns, the company has been backed with more than £5 million. Users all around the world now use the Gemini PDA and Cosmo Communicator. Planet Computers has recently launched a new smartphone – the Astro Slide.
Alongside mobile hardware, Planet Computers has also developed and released original software exclusively for its devices – including the popular Agenda, Notes, Airmail® and Data applications which are available to download from the Google Play store.

More on Astro Slide phone: Running the Android 11 operating system, Astro Slide works with the Google Play store, meaning users can download and use apps including the Microsoft Office suite for on-the-go productivity. The USB-C port enables users to connect the device to an external display via HDMI or multiple peripherals via the Planet USB-C hub.
Astro Slide is currently in production having been backed by more than 5,000 crowdfunding supporters since its launch. Pre-order units will be shipped in early 2022.