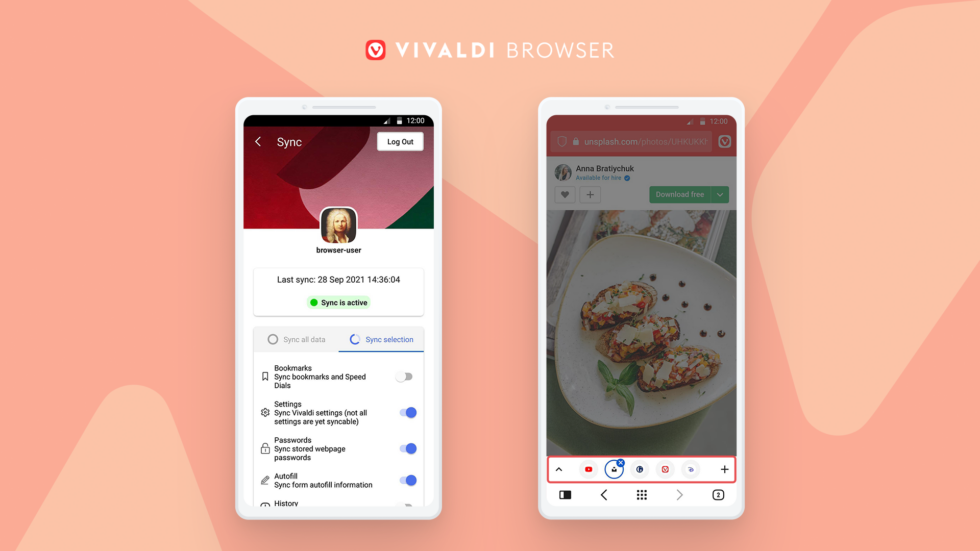 OSLO, Norway – Oct 07, 2021: The new update on Android – Vivaldi 4.3 – is driven by user feedback and ensures that it delivers when it comes to features, syncing, and privacy.

The Tab Stack Toolbar debuts in this version and allows switching of tabs within a Tab Stack while browsing, even when the Tab Bar is not activated.

The powerful end-to-end encrypted Sync functionality is now easier to set up with a new revamped user interface. So, now data can be accessed across computers and Android devices by using a Vivaldi account — securely and more efficiently than before.

Vivaldi doubles up its language support in the browser’s built-in Translate tool, powered by Lingvanex. With 68 new languages, it now allows millions to access the web and translate texts and web pages — quickly, privately, and securely.

For Vivaldi, user privacy comes first. That is why Google’s latest controversial and privacy-invasive feature, the Idle Detection API, has been turned off by default.

Download the new Vivaldi packed with improvements on mobiles and tablets running Android 5 or higher or an up-to-date Chromebook for free.

We like to focus on pushing the envelope. This helps us to give you new ways to experience the web on your Android, and express yourself like never before,” Vivaldi CEO, Jon von Tetzchner, says.

The new update meets the demands of daily browsing that respects your privacy, and offers more flexibility and efficiency.”

Keep your tabs on! The Tab Stack Toolbar is here.

Vivaldi’s love for tabs is real. With every update, more options are added to work with tabs. Recently, new Tab Settings were added and so was the ability to easily enable Tab Stacks (tab groups).

In this version, Tab Stack Toolbar debuts. This new feature lets users change tabs within a Tab Stack, a group of tabs while browsing any web page, even when the Tab Bar is not activated.

The Tab Stack Toolbar also includes options for opening and closing tabs within the stack and a way to preview the grouped tabs.

Syncing is easier with the revamped UI.

Vivaldi wants to keep browsing data safe, and its end-to-end encrypted Sync helps it to do that.

Vivaldi believes that everything that is stored in the browser belongs to the user, and no third-party servers are used but only Vivaldi servers.

With Vivaldi Sync, users can synchronize content and settings between multiple computers and Android devices – seamlessly and securely.

Building on this powerful functionality, Vivaldi makes it easier to set up Sync. Now more intuitive, the revamped Sync is polished with icons and colors that draw attention to key features and options and improves account setup and recovery.

The backup encryption key can be downloaded in Sync settings and stored in a safe location for peace of mind. If users ever forget the encryption password, they can simply use the backup key to decrypt their synced data.

With Vivaldi Translate, powered by Lingvanex, it is easy to instantly translate websites without the need for third-party extensions that spy on users.

With constant new updates to its built-in translation tool, Vivaldi delivers a solid addition of 68 new languages in this update. With a total of 108 languages, millions of people worldwide can now access the web in their languages, read translated web pages and selected texts — safely and securely. Lingvanex’s translation engine is hosted on Vivaldi servers in Iceland.

This built-in private translator works on Windows, Linux, macOS, and Android. This is a rare feature for browsers on Android, as most do not offer this functionality out of the box, and, if they do, the translation activities aren’t private. More details here.

Vivaldi is always looking for solutions that allow users to browse carefree. Recently, the Idle Detection API, another privacy-invasive feature by Google, came to light. This API can be used to determine if a user has interacted with the device or specific hardware, such as the keyboard or the mouse, or through certain system events.

The Idle API can be easily abused for behavioral tracking, and Vivaldi thinks it is unfair to expect users to understand the privacy implications of allowing a website to use this API. Hence, this setting has been disabled by default. Vivaldi does not let the website even ask; their requests are denied by default. However, users can override this default in the settings if desired.

This setting is turned off by default here: Settings > Web Pages > Site Settings > scroll to the bottom.