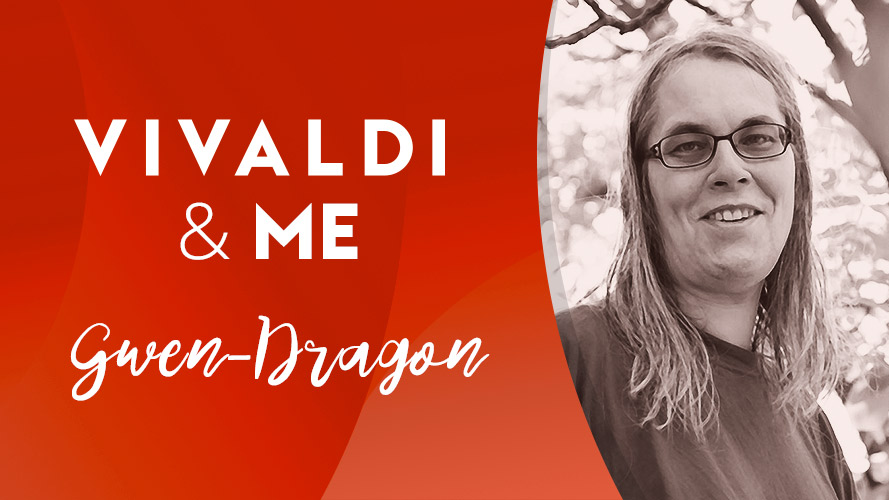 “Teaching others to use Linux, Perl, and Markup languages, contributing to the Perl community, to Opera in the past and Vivaldi at present gives me enormous pleasure,” she says.

She is also the happiest when – at the end of the day – she has learned a new piece of technology or solved IT issues without getting exhausted or crazy about strange bugs or bad operating systems.

Speaking to us on International Women’s Day, Gwen-Dragon says that gender equality in the tech industry did not come easily to what was once West Germany. That, she says, may be related to some myths girls learned at home and at school – like the myth that you need good mathematical skills and girls do not have them.

“Our school system did not help girls to evolve technical talents, we had no female role models. High school teachers were mostly men and were full of prejudice about girls and technology.”

But fortunately, times have changed.

“For many years we’ve had ‘Girls Days’ when girls can come in contact with technology and try for themselves what tech can do. Tech geeks have made boot camps for girls and women, female hackerspaces exist. Young women study Computer Science, Engineering, Mathematics, Physics.”

If you ask Gwen-Dragon how she got into programming, she’ll have to tell you a long story.

“It was in the mid 70’s and I was 15 years old when a relative took me to the Max Plank Institute in Munich to show me a Mainframe – strange huge boxes with many lamps, tape drives, typewriters and strange card readers. I learned to enter FORTRAN data on punch-cards and a CRT terminal keyboard, and crashed the system with only two keystrokes, shocking.”

This scary, bad start made her interest in computers evaporate almost completely.

“Some years later a friend of my family brought a little microcomputer box – one of those things with a hex display and a keyboard – and my interest in computing started to come back. I had a lot of fun typing hex code, looking at blinking lamps and making some simple calculations.”

Although she didn’t have enough experience with coding to keep up with the microcomputer box, her interest in electronics and computers never vanished after that.

“In the 80’s more microcomputers came out, but they were still very expensive – something for companies or rich nerds,” says Gwen-Dragon.

At the age of 18, she saw her first PC – it was an Atari and VideoGenie box in an electronic shop.

“I found gaming very interesting. With some BASIC language hacking, generating sound and simple graphics games made me addicted to computers. But these PCs were not affordable for me as a high school girl.”

After high school, Gwen-Dragon studied Information Technology hoping to get her hands on modern computers.

“I learned some Pascal and Modula, read many PC magazines like Byte and MC and CT, both German. I managed to build my own CP/M computer by assembling the boards, soldering, burning EPROMs, to program in Assembler, Modula, DBase and Pascal.”

Not surprisingly, after leaving University, she started working for a small engineering company and was responsible for frontend programming (Pascal and C), hardware controller development and software for process control (FORTH). Then followed a few years in software development for office software.

“At the age of 38, I wanted to get more creative skills, pure abstract language programming did not satisfy me anymore. I learned Multimedia Design, Desktop Publishing, and Web design. For many years now, Perl, HTML, JS and CSS and some other frameworks are my favorite “tools“ for creating websites for customers.”

Gwen-Dragon was disappointed by the course the “new” Opera took and searched for a user-friendly browser like the old Opera 12. After a while, she gave Vivaldi a chance and has been using it ever since. Today she is part of the exclusive group of Soprano testers as well as one of the most active and best-known Vivaldi forum moderators.

“I like to help users solve their problems but I dislike those who are unfriendly and think that a forum is a place to spit their anger about browser bugs and missing features.”

What motivates Gwen-Dragon beyond technology? She likes nothing more than a sunny morning, a large cup of coffee, her cat visiting her in her office, and the smile or the loud laughter of her partner who is an artist and a story-teller.

“In real-life, I am a mother of many cats, living in the countryside of northern Bavaria with my female long-term partner. I am interested in defending freedom of Democracy, the Internet and Civil Rights.”

She likes to relax just by being lazy and sitting on the balcony.

“I like fantasy and Science Fiction films, reading books, cooking, listening to 60’s and 70’s music with high-end audio hardware, oh and yes – collecting everything related to dragons.”

Words of wisdom to women in tech

“Do not pay attention to men telling you what you can and who you are. Claim child-care in your company. Be a role model for other women. Be an influencer and visible on the Web, at tech congresses. Be connected to other women in technology.”