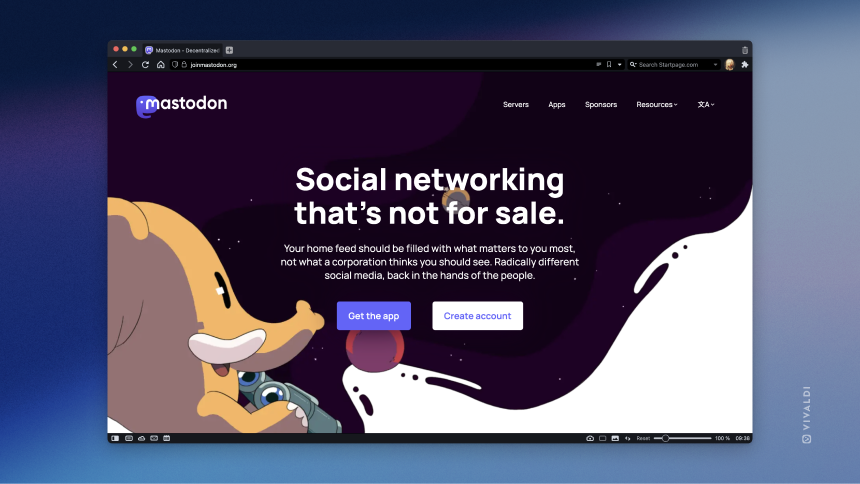 With so much news about social media these days, covering Twitter’s new owner’s recent changes, or trust issues in companies like Meta/Facebook, many people are looking for something else and have heard the word “Mastodon”. But what is Mastodon and how do you sign up?

It helps to start by saying what Mastodon is not. Unlike Twitter, Facebook, TikTok and most other social media, it is not one website or one app. This might seem confusing to many because if it is not a single entity, how do you sign up?

It helps to look back at the roots of the internet and other common forms of communication and how they work. Suddenly clear parallels appear and the concept is not quite so alien.

When you call a friend via your phone, it is not necessary for you to be on the same network as them. You can have one provider and they another and yet you can still chat without issue. The same is true for email, your friend might be on Gmail and you Fastmail but you can exchange emails with ease. This is federation, a term used in technology to describe negotiating communications across separated networks.

Often companies will create closed networks that will not federate. By offering features tied to their platform, each provider hopes that their service will gain the majority of potential users and give them total control of the network and connections.

On a federated network all providers must share responsibility and control. It is therefore far more democratic and diminishes the chance of you being locked to a single provider. If you don’t like your provider or if they treat you badly, you can leave and just choose another provider, without the fear of losing your social connections and contacts.

Mastodon and the Fediverse

Until now almost all popular social media networks have been closed and unfederated. The excitement we have for technologies like Mastodon is that it helps break down overarching control.

Mastodon servers talk to one another via a technology called ActivityPub, an open standard formed as part of the Social Web Networking Group of the W3C (World Wide Web Consortium). Together all Mastodon servers (and any other software that speaks ActivityPub) form a collective social media network often affectionally called, “The Fediverse“.

Because there is not one owner of the whole thing, step one to joining involves finding a Mastodon provider (or instance), just like you did when signed up for a phone contract or picked an email provider.

Each instance can have its own rules and may cater to different groups or interests. Some will be entirely closed, others only accept new members via a waiting list or perhaps only allow people from one region to join. This is often done because the majority of instances right now are run by small non-profits and they need to make sure they can scale to accommodate their users with hardware and moderation capabilities (to keep things nice and friendly).

Vivaldi Social (our instance) is in a fairly unique position here in that it is backed by a small company but one with enough capacity that it should be able to handle a quite a few users. We also run it with the rest of our servers in Iceland and thus have strong user centric, privacy protections backed by law.

Furthermore, because we are founded by people who have long supported open protocols for internet communications, and often pushed back against the misuse of larger technology providers, it just felt very natural for us to offer such a service. We are also able to make onboarding to our instance really simple for our current users, since they can make use of the login they likely already setup for Vivaldi browser sync, our forums, or our blogging platform. If you use one of these you can just login with your regular credentials and an account will be created on the fly. Vivaldi Social is also open for signups from anyone else who needs a provider. Join in here: https://social.vivaldi.net

Whether you choose us or not you will be able to communicate with Mastodon users across “The Fediverse”. We look forward to chatting with you there!

The trouble with Chromium translations