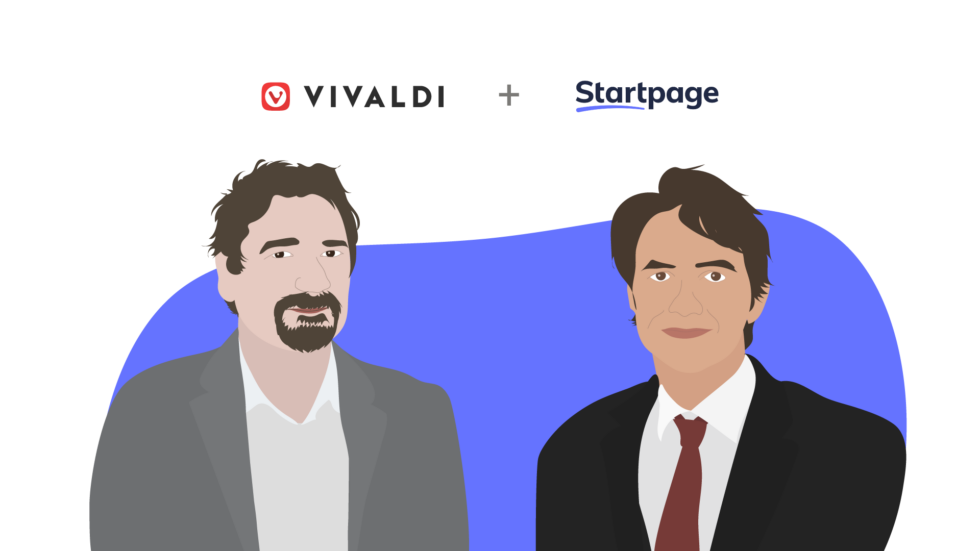 Each year on January 28th, Data Privacy Day is celebrated around the world. Governments, organizations, schools, specialists and activists participate in events to raise awareness about the rights to personal data protection and privacy.

This year, Vivaldi hosted a conversation about Data Privacy and more with one of our long-time search partners Startpage, who are also renowned for their dedication to user privacy.

In this chat, Varsha interviews Jon and Robert on various aspects of data privacy, while leaving room for the conversation to flow freely on a number of topics ranging the impact on digital well being to the perils of tracking for individuals and societies. And the role that advertising models, like surveillance-based advertising play in eroding privacy protection.

We also touch on the privacy tools in Vivaldi, such as our built-in ad and tracker blocker and congratulate Startpage on the launch of their own Startpage Privacy Protection Extension, this month.

Finally, in keeping with Data Privacy Day,  the conversation shifts into discussing how to boost awareness about today’s privacy pitfalls and how people can make better choices and  take direct action to help improve their privacy landscapes online.

Watch the full video of their conversation:

Jon von Tetzchner is the Co-Founder / CEO of Vivaldi,  the most privacy friendly and customizable browser. Jon has been shaping the internet through browser development and leadership since 1994. He currently resides in Massachusetts.

Robert E.G. Beens is the Co-Founder and CEO of Startpage and StartMail, and a recognized privacy expert and advocate. At Startpage, Beens oversees operations, product development, technology, and finance. He is also a commercial airline pilot with Netherlands-based airline KLM.

So the level of tracking is just crazy. And then the question is what can that be used for? Now it may be used to influence you and your purchasing decisions, but it may also be used to influence you and kind of your opinions and potentially also in political opinions and and potentially even to be used by states to destabilize other states. I mean, there’s so many ways that you can utilize this data. So for me, this isn’t just about your personal privacy, it’s just a question of what’s reasonable for companies to be able to do.“

Whatever we do, send private messages, short work online, you name it. And behind our scenes, without most people knowing. Although the trend is definitely positive when it comes to awareness, websites are viewing you, recording you, creating profiles, everything that John said as well.

And there’s two levels of why that is hurtful to us as human beings and to us as a society. It’s on the individual level. We’re sure of thousands of ads every day. All of them personalized to increase the chances that you’ll make that final click and buy stuff and make big tech companies even richer.

But it also gives you a negative impact in your well-being because it’s creepy psychology to have this. This phenomenon is called the mere exposure effect just by being exposed to something. And so you start viewing it in a more positive light and advertising that has served to us again and again.

It manipulates our perception of things and it starts messing with our free will as human beings on an individual level.”

We are  trying to make it possible for people to more easily move away from being locked into some of our competitors that really have a number of services, which makes it really hard to get out. But the mail client we do, the calendar we are doing, even the newsfeeds now. there’s a number of choices like this that we’re trying to do, which is help you get away from the big guys and their close environments. And I mean, that’s part of what we’re trying to do and work with good companies to do the right thing.”

Human beings are demanding change. They don’t want to be tracked, and legislation authorities are finally putting that in legislation. And it’s no longer sustainable to build a marketing and advertising ecosystem based upon tracking of people. So from that perspective, I think we’re moving into a world where contextual marketing is going to be much more important.”

Obviously there is choice. And if people choose products that have a better kind of view of how their data should be used or not. (preferably not), then that’s a good good start,for trying to to be careful with what kind of traces you leave on the internet. And enabling things like tracker blockers to make it harder for people to be able to track you.

But in reality, I still believe that what we need is for society to take a stand here as well. And I think this is part of why we all have to try to influence the politicians to do the right thing, and there is movement in this right in its direction, both in Europe and the U.S.“

We’ve shielded people’s personal privacy with the most favored search engine for 15 years, but now we have this privacy protection extension to to add on top of that. We offer the opportunity to secure yourself across the entire internet. And I feel fortunate to lead a team that is now offering this comprehensive tool that helps protect people’s right to privacy and for the wonderful community that has gone around Startpage.”

I have a passion for changing the world in a positive way. I want us to make a difference in what we are doing. And I think we are doing that with the products that we build and the stance that we take on moving the world forward. And I think it’s important that companies are doing that. It is not only about the bottom line, it’s about doing the right thing, and taking responsibility for the society we live in together. “

What choices have you made to improve your online privacy? Or are you not concerned about being tracked? Speak out in the comments below.