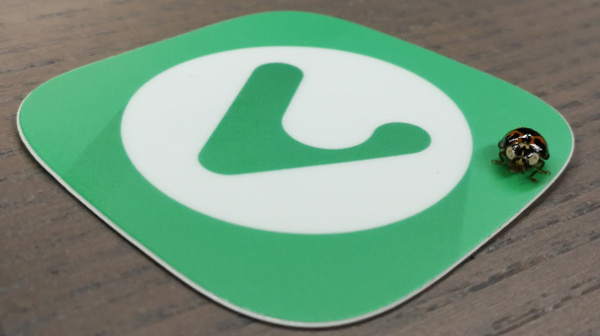 We thought we'd found a bug on one of the office computers, but as Coccinellidae are not “true bugs”, we'll call her “Feature” and let her live. pic.twitter.com/xy0B81cPSF

A few days ago, we innocently tweeted this and went back to work. But then all hell broke loose on our #marketing-pr channel on Slack. For a few days, our devs were engulfed in an entomology debate that no one had thought possible in a browser company. And it took the Marketing team a while to claim its channel back.

Here we give you the gist of the discussion. Some details have been edited for clarity.

A few minutes after tweeting, Ruarí posted in the #marketing-pr channel:

Apparently, the Norwegian environment agency was calling for people to put the species in a box and mail it to them. It turned out this was an invasive species that could cause serious harm to native species and property in Norway.

“If I can ever find her again. Or should I send her off in a box?”

“Anyway, I cannot find her so she escapes both the death penalty and jail,” he concluded.

“Just be nice to her, please! After all, she is a ladybug,” chimed in Varsha.

“She is no ‘bug’,  that we already established,” wrote Ruarí and posted this from Wikipedia: “Coccinellids are known as ladybugs in North America, and ladybirds in Britain and other parts of the English-speaking world. Entomologists widely prefer the names ladybird beetles or lady beetles as these insects are not classified as true bugs.”

Then he asked Tarquin for his thoughts on killing the invader species.

“They are intentionally released by gardeners as natural pest control that avoids the need to use pesticides. You choose – spray insecticides all over your food, or let the ladybird live. Ladybirds über alles,” replied Tarquin.

Just as it all looked under control, Varsha posted a link on our Slack channel to a thread on Reddit. Someone had posted our tweet in Programmer Humour and it got upvoted more than 16K times. There were 240 or so comments.This got the devs started again.

It’s not a bug, it’s a feature from ProgrammerHumor

“I think it was @mariap who suggested ‘Feature’,” posted Ruarí giving credit to Maria. “Shame on Reddit they just have the screenshot and don’t know of my plan to kill her as discussed in the comments. Seems like they also want her dead.”

“That was after I’d read on Wikipedia that it is not classified as a bug,” wrote Maria.

But then Ilya had to disagree:

“Not a true bug, sorry sir, you are misusing the word. However, I have looked into the pattern, and it does appear to be one of the various morphs of Harlequin Ladybird, which is invasive but beneficial for farmers. Either that, or there is some very similar native species, but I couldn’t find it.”

“The … er… phallic shaped mark on the back is quite distinctive, and so are the conjoined black dots on the sides. The others that have those (like the 14-spot, which has square spots, not circular ones) are not a match. The white face marking and m-shaped pronotum mark does appear on many harlequins, with the pronotum mark being characteristic of the species,” insisted Tarquin.

“Spots and colors don’t matter, all these insects are from one widespread family – beetles or, in other words, bugs. Coccinellidae are commonly yellow, orange or red with small black spots on their wing covers, with black legs, heads, and antennae. However, such color patterns vary greatly. For example, a minority of species, such as Vibidia duodecimguttata, a twelve-spotted species, have whitish spots on a brown background. Coccinellids are found worldwide, with over 6,000 species described.”

“For most species, the shape of the reproductive organs is the defining characteristic but without access to that info, the shape and interaction of the spots (but not the number) can be used to get a good idea of the likely species. Of course, if you would like to take a picture of the ladyfeature’s reproductive organs, I can help with the definitive species determination,” offered Tarquin.

Ilya could not see the point of going that far. Things were clear:

“Harmonia axyridis, most commonly known as the harlequin, multicolored Asian, or simply Asian ladybeetle, is a large coccinellid beetle,” he quoted Wikipedia again. “Thus, it’s not a feature, but a nice bug”.

But Ruarí would not be silenced.

“@ilya in the very article you linked to on Wikipedia it says: ‘Coccinellids are known as ladybugs in North America, and ladybirds in Britain and other parts of the English-speaking world. Entomologists widely prefer the names ladybird beetles or lady beetles as these insects are not classified as true bugs.’ So I think our tweet was ‘spot’ on.”

“Seems like a limitation of the English language,” Ilya posted. “In Russian science, there are no terms for ‘true bugs’ or ‘non- true bugs’. There are beetles and arthropods. Heh, that means that ‘features’ in other countries are ‘bugs’ in Russia.”

“Hah, I was just going to congratulate you on returning the channel to the regularly scheduled topic,” Tarquin said.

And so it lives!